Loading SWF for the first time...
Adobe Flash is required to run this project in the browser. Enable Flash
Support This Game

I developed this game as part of the Chain Jam, a jam where each entry would be a 4-player 1-minute game, played in succession by the container Chain Game.

TOWNQUEST is basically a super-simplified real-time strategy game. Each player starts out in possession of a town, and the goal is to conquer as many towns as possible. Towns spawn soldiers, which will automatically defend the town against enemy soldiers.

Soldiers have some AI, where they will prioritize targeting nearby enemy soldiers for attack, while staying close to their lord while being commanded.

This leads to gameplay where the player picks up soldiers from their town, moves them to a target town, and then observes the resulting fight. If needed, they can return to their hometown to bring over more soldiers. Combine this with 3 other players vying for the same few towns, and you should get some quick, fun fighting action.

Unfortunately, the Chain Jam's 1-minute rule means that likely nobody catches this when playing the game. As a 1-minute game, it's all over too quickly to fully understand what's happening, so I made a standalone release which extends the time to 5 minutes instead. 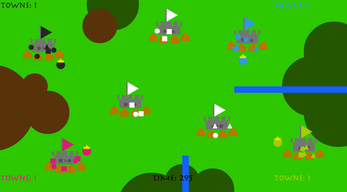